The fourth of five sons, I was born in Allentown, Pennsylvania to two emotionally scarred, terminally incompatible parents. From the moment we could say ouch, my brothers and I were indoctrinated in the death-defying high-wire act of denial commonly known as Christian Science, gently but firmly reminded, when we imagined we were sick or uncomfortable, that we were God’s perfect children.

Like my brothers before me, I began first grade at the age of four in a private school, where I flourished until my parents began actually expressing their feelings about one another. Following a rancorous divorce my father was kept at a distance for so long that when I finally saw him twenty-some years later at one of my brother’s concerts, I had no idea who he was or why he was addressing me.

I took piano lessons when I was five or six, but didn’t begin molesting with more serious intent the various musical instruments in our home until my eighth year. A couple years later we moved to the Poconos, where, my older brothers already having made their choices, I finally settled on the drums.

I guess it wasn’t terribly different from being born into a family of budding mobsters and deciding between the brass knuckles, the piano wire and the baseball bat, percussion instruments of another sort.

Driven in part by my older brother’s enormous talent and escalating success and in part by my own seed of natural ability, I made a career out of music, occasionally finding projects that at least briefly inspired me. In time my playing improved, as did the quality of the musicians I played with, but too much of the time my heart was elsewhere or, more often, nowhere at all. I just couldn’t seem to stoke my stinted and inconstant passion to a full flame. I was a wreck. And I remained one for a very long time, sustaining myself with books, laughter, women and sex.

Quitting the music business after twenty years was terrifying—playing drums was the only work I knew and I had a low enough opinion of myself to doubt my ability to learn anything else—but I had nothing more to give, I was getting nothing in return and the monotony was sucking the oxygen from my brain. 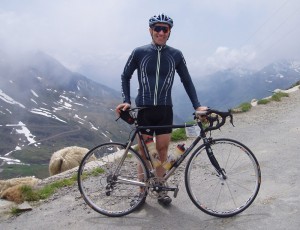 Because I’d loved cycling since childhood I looked for and quickly found employment in a high-end bike shop in New York City, where within a couple months I was promoted to manager. I was interested, even motivated for a while, but in time working with the public, managing a staff and battling a floundering industry began to take its toll, gradually chipping away at the fragile surface of my sanity.

Increasingly discouraged and inoperably aimless, I knew that if I didn’t do something, make something or destroy something, my brain would transmute into a canned ham.

It was in hopes of producing that indeterminate something—something of value, something that would affect others as music, art and literature had affected me — that I began my first significant effort at writing.

And here I am, still trying.